The “Renowned Wineries of Burgenland” is an association of twelve top wine producers from the Burgenland, who stand for the current and future preservation of the natural and cultural landscape. The individual characters of the wine producers and their wines are as diverse as nature itself. They combine tradition with meaningful innovation.

Only those wineries which display consistently high quality in their wines can belong to the RWB. The trademark and symbol is the leaf of the Welschriesling, which frames the letters RWB and is equivalent to a seal of quality.

The “Renowned Wineries of Burgenland“ have the following objectives:

The RWB group is the flagship of the associations of Austrian wine producers. The RWB wine producers together cultivate 370 hectares of vineyards and employ more than 100 employees. 2 million bottles of excellent wine are produced each year. The average export share amounts to 24% and the wines are delivered to more than 30 countries in all continents. Annual turnover amounts to more than 16 million Euros. 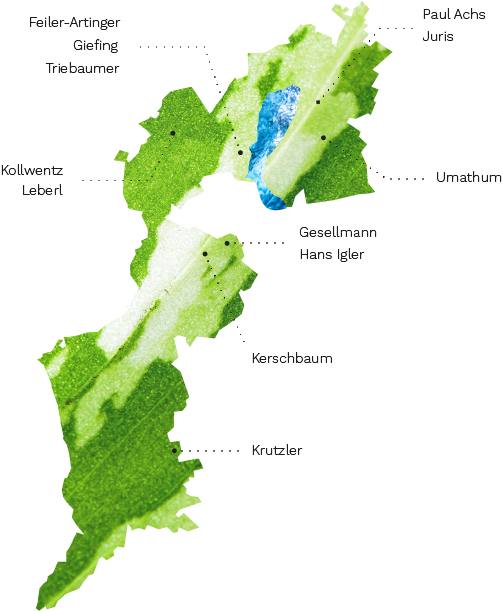 The RWB are responsible for a wealth of events around Burgenland wine. With presentations, tastings and participation in competitions, the group draws the international audience’s attention to the top quality of the fine wines from Burgenland.

Since the group was founded on 14th December 1995 at the Rust wine academy, the RWB producers have been presenting their wines together on a variety of tastings ever since among others in metropolises such as London, Berlin, Hamburg, Zurich, Bratislava, Antwerp and in the countries of Hungary, Poland, Italy and France.

A fixed point in the wine calendar ist he presentation oft he new vintages at Schloss Esterhazy which attracks numerous wine lovers every year. Wine events such as „Wein am Berg“ or the range of events known as „The great locations of Burgenland“ enable the wine producers to express themselves and their individuality.

Year after year the “Renowned Wineries of Burgenland“ lead the way when it comes to national and international awards. Since the group´s founding they have been awarded the Falstaff prize or Falstaff variety prize more than 30 times, and have been granted 8 accolades as the best wine producer of the year by “A la Carte“ during the “Trophee Gourmet“. Among the Renowned Wineries of Burgenland are 10 „Falstaff Winemaker oft he Year“. Several wines are also awarded by the Wine Advocate in the USA each year. Considerable successes have also been achieved during the International Wine Challenge in London.

Shopping Cart
There are no products in the cart!
Continue Shopping
0